By Hubert Nguyen, on 11/20/2020 13:37 PST
Most of the value is concentrated in the swivel screen and its gimbal video recording feature

The LG Wing is a commercial concept phone that is the first in the LG Explorer series of devices. It maximizes the user experience (UX) for landscape-optimized apps and augments the total available screen area by integrating a secondary screen. In this review, we put this new concept to the test and let you know how it works in the real world.

There is more to the LG Wing than just the display, and LG has also done a lot of work on video capabilities.

We will go right to the good stuff, with the new form-factor and video filming experience. Then we’ll cover standard features such as photography, system performance, and battery life.

Not competing with Foldables. Hello T-Mode

The LG Wing’ display configuration is “the” core feature of the phone. It does avoid some caveats that folding phones have introduced.

I think that Folding phones like the Galaxy Z Fold2 are great: they easily double the display surface area and provide a tablet-like experience in a pocketable chassis. That’s Amazing stuff.

"WHEN CLOSED, THE LG WING LOOKS AND FEELS LIKE A STANDARD PHONE"

However, they also introduce friction points. For example, foldable phones do not have a “normal phone” feel in your hand (or pocket). One-hand usage yields an acrobatic experience, and they are truly two-hand devices.

On the surface, and when closed, the LG Wing looks and feels like a standard phone. That’s one crucial difference with Foldables. The second difference is the far more affordable price since the Z Fold 2 is twice as expensive. The LG Wing is not “cheap” by any means, but that’s an enormous difference.

The LG Wing takes a whole different route and provides a “standard” form-factor that looks like a regular large smartphone until you turn the screen 90-degrees. The upright landscape-mode lets some apps run optimally without impairing your grip on the phone.

When opened, we say that the device is in T-mode, and apps could theoretically exploit the T shape in a different orientation (inverse-T, for example). Some do, but most don’t.

The T-Mode is fantastic for video games, movies/TV shows, or maps, to cite the prominent examples. At the same time, you can comfortably hold the phone with one hand, making it comfortable in all kinds of situations, including public transports.

Also, in T-Mode, the secondary screen keyboard feels pretty “normal” to type on, unlike the unusually wide experience of dual-screen and foldable phones.

The secondary display can show extra user-controls for the app presently running on the primary display. Or, it could be a completely different app on the small screen. There is even a “trackpad” mode if you need a mouse cursor on an old desktop-only website!

Frankly, I love this form factor for watching movies because videos lend themselves perfectly to the landscape format. Foldables may be better for pure productivity, but the LG Wing nails it with 16/9 content.

The screen swivel mechanism seemed robust and tested for 200,000 cycles, according to LG. I like how neatly it opens and closes, and fortunately, you don’t have to cycle it too often (unlike foldable).

If you want to see how the mechanism works, I’d recommend watching Jerry’s teardown:

A few things to watch out for

While it may be very nice overall, the LG Wing has a few friction points worth noting. For example, the Power and Volume buttons are difficult to access in T-Mode, and that is something that I bumped into often.

Few apps run simultaneously on both screens. It is a typical problem that dual-screen phones encounter, and while LG did an excellent job with some core apps, I feel like this form-factor is currently underexploited. I am unsure if developers are willing to invest in it.

The carousel launcher in T-Mode is not as functional as just having icons and doesn’t bring much value to the table, even though it looks agreeable at first glance. By the way, you might “have to” use LG’s launcher to benefit from the secondary screen.

LG leverages the LG Wing’s T-Mode to build what I would call a “Gimbal Emulator.” If you start the T-Mode camera, it will switch to a gimbal video capture mode by default, with the secondary screen showing a gimbal-like controller. If you have used something like a DJI Osmo, it looks and feels quite similar.

The virtual Gimbal has typical Gimbal modes such as “Pan Follow,” “Subject Lock,” and the regular 2-axis image stabilization to avoid general shaking while walking or running.

There’s also the LG dual-recording feature (front+back), which is great for Vloggers, and this is something that is more and more adopted by other OEMs like Huawei.

The official video below does a good job explaining the various modes and options available to you:

I like the LG Wing design: it is modern and clean. The back cover somewhat attracts fingerprints, but this is a common problem with glass phones, and you’ll probably use the LG case anyway.

I consider it a large and heavy (200g) smartphone, so if you prefer something light, I strongly recommend checking out the LG Velvet, which runs on a similar hardware platform and is much more affordable.

LG says that the Wing is certified with an IP-54 rating, which means that it can resist splashes but should not be submerged.

Also, the phone has a MIL-STD-810G certification (probably on a dozen tests only), which is a good indicator of sturdiness. Still, the glass chassis will certainly shatter if dropped on concrete, so do not raise your expectations too high. While a nice bonus, this certification does not make the phone as robust as the legendary LG V20, in my opinion. 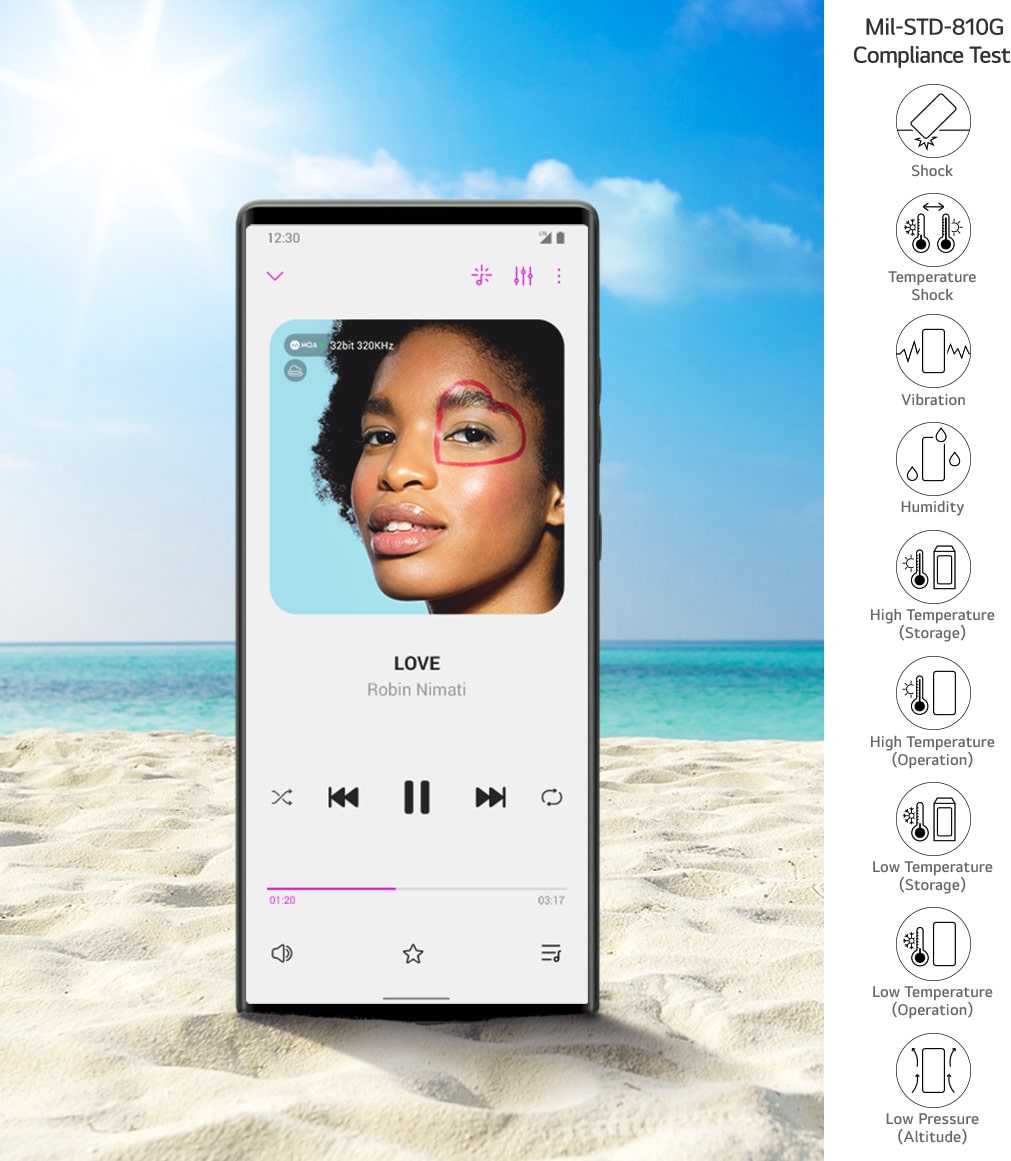 Fortunately, LG provides a protective case for the phone, and it is a welcome addition. Ensure that the phone is firmly inserted inside the case. Mine slipped out once but fortunately landed on a soft surface.

The 6.8-inch Primary OLED display looks great and is almost bezel-less. It has a 1080p resolution but is not HDR-certified, so there are better screens in that price range. However, I do not think it’s a bad tradeoff in the context of movies and games as the most-prized type of content for this phone.

The 590 NITs of maximum brightness make the display usable in a bright outdoors environment. It is not the absolute brightest display you can find, but given the technical challenges to make the screen as thin as possible, I understand that some sacrifices were necessary.

The secondary 3.8 OLED display is not 100% identical to the primary one. Fortunately, it is not a concern, and most people will not even wonder if there’s a difference. It is sharp and agreeable to use when there’s proper app support.

The LG Wing camera system has three cameras in the back, one of which is dedicated to Gimbal video recording, as previously mentioned.

For photography, you have two cameras at your disposal: a Primary 16 Megapixel camera and a secondary 13 Megapixel Ultrawide camera. From a photophy point of view, Ubergizmo rates the LG Wing’s camera system with an Uber HW Camera score of 144*, making it the most powerful LG mobile camera ever. (*Uber HW Camera v1.1)

The primary 16-MP camera is very decent, and our analysis of the hardware shows that it would compete with a phone like the Huawei P30. We give it its hardware a score of 7.8/10 at the time of publishing.

For more information about our Uber HW Camera scores, read our FAQ and check the camera hardware benchmark’s homepage.

Overall, the camera system is pretty decent, but in the $1000 range, you could get a more powerful camera system such as the Galaxy S20+ 5G, for example. That said, the LG Wing’s primary focus is not the camera.

The LG Wing daylight photography is equivalent to much more affordable phones, but is pretty decent in absolute terms.

Powered by a Qualcomm Snapdragon 765G platform, the phone has enough horsepower to make the experience agreeable and generally snappy.

However, it won’t match the performance of high-end phones, not even older ones. That said, there is more to a platform than just the benchmarks. the support for 5G, the latest version of WiFi, Bluetooth and more doesn’t show in any of the benchmark numbers, but it is still important.

Unless you are starting to play heavy 3D videogames, use AR/VR apps, or heavily edit videos on your LG Wing, the real-world difference in performance with the high-end Snapdragon 865 is not very apparent.

The LG V60 dual-screen could be a suitable option if your goal is to have a maximum performance at your disposal.

Because of its unique design, the LG Wing might have a smaller internal volume to accommodate thermal management, which would explain the decision of going with a 700-Series snapdragon instead of the 800-Series usually available in a ~$1000 phone. The Snapdragon 765G is likely to be smaller and generate less heat.

Geekbench is a CPU and Memory benchmark

GFXBench is a gaming/graphics benchmark

The 4000 mAh battery size is very respectable, although you could probably find 5000 mAh batteries on competing phones within comparable price, weight, and size parameters (minus the swivel screen).

Gimbal video recording aside, the phone should be power-efficient, and you can expect to have a full day’s worth of use in everyday scenarios. If you watch many movies and play games, your screen time and computing requirements would be drastically different.

The wired charging can replenish ~40% of the battery in 30mn, which is okay in speed, but 15% slower than the iPhone 11 Pro. For reference, the fastest-charging phones can charge twice as fast, but there are relatively few of them.

The LG Wing’s primary goal is to explore a new user experience concept. In that regard, it is a success because the LG Wing introduces something bold, compelling, and original.

If people end up liking it, and if “pricing” is the main issue, LG can cost-reduce and optimize this kind of design, so the form-factor could theoretically become popular down the road.

The LG Wing and its T-Mode push mobile-computing boundaries in a direction that no-one had thought of before, and it is fair to give credit where it is due.

"THE LG WING INTRODUCES SOMETHING BOLD, COMPELLING, AND ORIGINAL"

For sure, you can find a better performance/dollar ratio in many “standard” phones, and if you criticize this phone for its value-proposition when compared to such phones, you would be right. But if that’s the case, it is simply not a phone for you. In fact, most of the value is concentrated in the swivel screen and its Gimbal video recording feature.

There’s no great way to score the added-value of the LG Wing. If it was just a standard phone, the general performance would yield it a 7.5/10 in its category. However, because of the innovative form-factor, we’re pushing our final rating to a 8.3/10, leaving it to your discretion to agree or not.

You now have enough information to make an informed decision. I had a wonderful time with this phone and cannot wait to see what the next “LG Explorer” device will introduce. Keep an eye out at Verizon and T-Mobile for potential Black Friday deals.